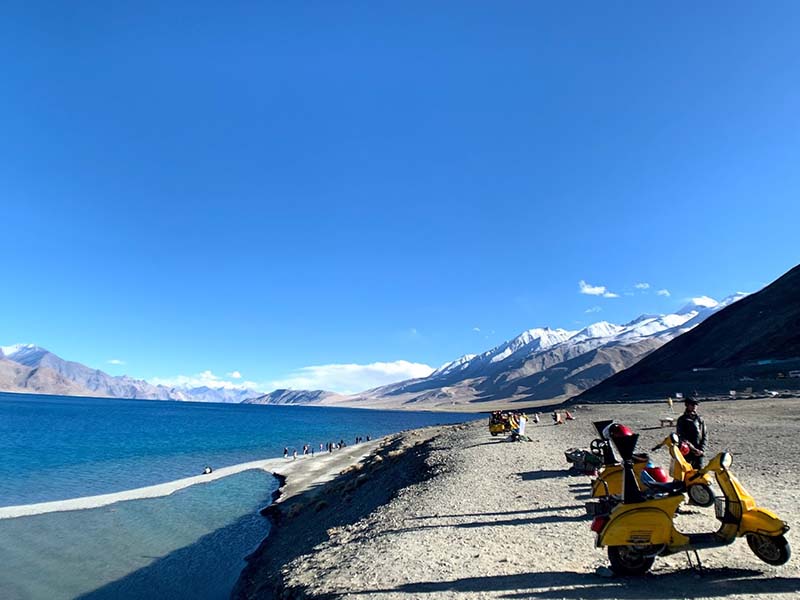 Care to drive on some of the highest motorable passes in the world or how about a camel safari in the desert in the sky? We bring to you Leh Ladakh Tour Packages, tastefully crafted to offer you a vacation in India that will remain etched in your memory forever. The “Land of High Passes” in the heart of the difficult terrain of Kashmir is the land of adventure, unbelievable sights, and ancient roots of Tibetan Buddhism, heartwarming culture, and life-changing experiences. Leh Ladakh Tour is on the minds of all kinds of travelers-the nature lovers, the adventure enthusiast, people seeking to get away from the hustle-bustle of lives and many more.

When you plan a holiday in Ladakh get ready to be mesmerized. It is simply something out of the world. Starting with Leh, the capital city of Ladakh the ancient city is a treasure of history, architecture, charming tourist attractions and more. Explore the scintillating Buddhist Monasteries where you’d find ancient Tantric Buddhism still in practice. Travel to the emerald Pangong Tso Lake or the breathtaking Tso Moriri. Planning a Ladakh bike trip also raises the fun quotient. Do the thrilling mountain biking from Khardung La; one of the highest motorable passes in the world and do the double humped Bactrian Camel Safari in the sand dunes at Hunder in Nubra Valley. The charming places to visit in Ladakh also include the Magnetic Hill, a rare natural phenomenon that defies the laws of gravity.

Go trekking, indulge in river rafting, go camping and the many excitements the land offers. Like its other matchless thrills, trekking on a frozen river is among the most exciting things to do in Ladakh. The Chadar trek is an adventure unlike another. The festivals of Ladakh truly deserve a mention. The colorful Cham Dance, masked dances by the monks is a spectacle that one does not forget easily. Stay in the monasteries, enjoying Ladakhi hospitality at one of the homestays are also some of the most fun parts of a Ladakh tour. The cuisine of the land is too heavenly like its beauty and bliss.

When it’s the adventure of a lifetime, you need the perfect plan. The best time to visit Ladakh contributes much to the success of a trip to Ladakh, especially if it’s a motorcycle tour that your heart desires. The months from May to October are believed to be the ideal months to travel to Ladakh. Rest of the year, snow covers the grounds making it impossible to travel by road. Also, the temperatures dip to freezing levels which further puts up a challenge. Moreover, it’s the time for the ultimate adventure Chadar trek on the frozen Zanskar River.

The most popular options of trip to Ladakh are motorcycle tour packages from Manali. Besides the bike tour from Srinagar or even a round road trip starting from Manali and also covering Srinagar is also popularly sought. While of you are short on time, hop on a flight to Leh. Explore the wonders of Ladakh with sightseeing tours and adventure excursions.

Take your pick from our Ladakh holiday packages and explore the land of lamas and soak into the ethereal surroundings, friendly people and the thrill of the Greater Himalayas.

After breakfast drive to Nubra Valley (known as the Valley of Flowers) via Khardong Pass (highest motorable road in the world, 18,380 ft). Enroute, admire the spectacular views of the never ending snow-capped mountain ranges around K-Top. After spending some time at k-top, proceed to Nubra . After Hotel check-in, enjoy the Camel ride at Sand Dunes (own) between Diskit and Hunder Village. Overnight stay in Nubra.

After breakfast visit Deskit and Sumur Monasteries and drive back to Leh by same route. Overnight stay at Hotel.

After Breakfast leave for Pangong Lake 14,500 ft, through Changla Pass 17,350 ft, 3rd Highest Motorable road in the world, Arrival at Camp, Later free time at Leisure and enjoy the color changing lake and the sun set on the banks of lake. Overnight stay at Pangong Lake.

After Breakfast leave for Kargil, enroute visit to Magnetic Hills (Defiance of the law of gravity wherein a vehicle starts climbing up the hill when put in a neutral position) to Alchi Gompa, Post lunch leave